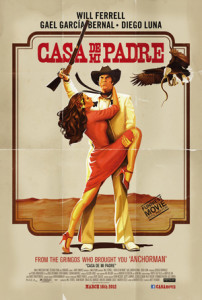 Casa de Mi Padre is a Spanish language film staring Will Ferrell.  It is a unique idea, but I don’t think it was fully developed enough, or it at least needed a few script rewrites.

Will Ferrell plays Armando Álvarez the dumb son of cattle rancher, and tries his best to stay out of the way of the local drug cartels.  Unfortunately his smart and good looking brother Raúl played by Diego Luna comes home with his beautiful bride to be Sonia(Génesis Rodríguez), and brings the drug cartels with him, so it is up to Armando to save the day.

I thought going in to this that Will Ferrell was going to play this like an American playing a Spanish part, and do it with a broken accent, and be screwing up his lines and everything, but he did not.  His accent wasn’t good, but it wasn’t awful either.  So pretty much they played it like a serious yet bad Spanish language soap opera, and it was bad, and at times bad enough to be funny, but mostly with their props, they used mannequins as extras or stunt doubles, the animals were puppets, and the backdrops were poorly painted, but that only gets a few laughs here and there.  The main gag was that pretty much everyone was over acting their crappy lines, not that the lines were funny in and of themselves, so it just fell flat.

I think that there was a funny movie to made here, but they didn’t make it.  They were sold on the fact that Spanish soap operas are funny enough on their own, so they just made one staring Will Ferrell.  It is a shame that they wasted so much talent on this movie.  The props make you laugh once or twice, and really hard a couple of times, but it is one of those short movies that feels like you wasted a whole day.