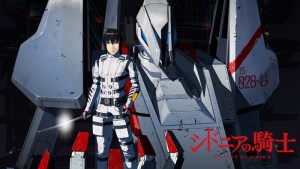 I used to watch a lot of anime, but since I have consumed most of the decent material, my viewing has slowed down.  However since Netflix imported Knights of Sidonia only months after it finished airing in Japan, I thought I would give it a try.  It has been fun to watch some anime again, and the 3D animation can be cool sometimes, but this series is fairly generic.

Just by looking at the promo shots most anime fans could tell you the plot without even having to read the description.  A teenage boy, who is kind of a looser, is the last hope to vanquish an alien foe.  Only he has the skills to defeat the Gauna, giant alien monsters who destroyed Earth, and protect the last of humanity.  Yes the way he defeats the monsters is to shoot and poke them with his robot suit of armor, and of course the remnants of humanity are floating around in a giant gun shaped spaceship.  Do all the girls like him even though he is a weirdo?  Why yes they do!

Thankfully this show cuts down on all the fan service, and the wondering about the meaning of life and what it is to be human, to focus on why we are all watching this show in the first place: Watching robots and monsters beat crap out of each other.  Thanks to the 3D animation it looks really cool too.  Sadly what the 3D animation doesn’t do well is allow the human characters to interact with each other.  They are stiff, and they don’t emote well.  I think this is why the show doesn’t focus on that a lot.  They just didn’t have the money to do that part right.

What also struck me while watching this show is how close it is to Battlestar Galactica.  Then I realized that since this show is a generic anime, that all Battlestar Galactica was is a long live action anime.  I mean it had sexy robots, space battles, the last of humanity on a spaceship, and a lot of questions about what it means to be human.  Crazy I know.  It blew my mind!  Anyway back to Knights of Sidonia.

I have enjoyed watching Knights if Sidonia, but it is not really a great show.  Just a watchable one.  It is generic, and due to the poor 3D animation the character interaction lacks a little punch, but watching giant robots versus giant monsters is always fun.  If you are not an anime fan this show will not win you over, but if you are, it is a fun diversion.  I hope Netflix keeps directly importing its own anime because that is one way to insure that I keep renewing my subscription.