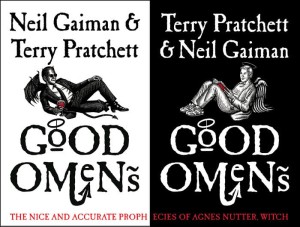 Good Omens is a book that was written in 1990, by Neil Gaiman, writer of the Sandman comic book series, and Terry Pratchett, writer of the Discworld books.  The book has won critical acclaim and has sold quite well.  But the important question is whether I liked it or not, and I am glad to say that I did.

The book is about an Angle, Aziraphale, and a Demon, Crawly, that decide to try and stop the apocalypse, so they set out to bring up Adam the Antichrist properly, so that when he is old enough he won’t do what he was born to do, and destroy the world.  There is also a fun subplot about the four horsemen: War, Famine, Pollution (Pestilence retired), and Death.

For those of you who have read Terry Pratchett books you will instantly pick up on this being one of his novels.  The zany off the wall style, and all the random footnotes that you can’t wait to read, and added in to the mix is quite a bit of Neil Gaiman’s style and what seems like effortless character building that all his books are known for.  I very rarely laugh out loud while reading books, but it was common occurrence while reading this book.  Its one weakness is that it gets a little sacrilegious here and there.

It is a shame they never got to write their follow up novel, and with Pratchett having Alzheimer’s disease, they probably will not get too.  Good Omens is a funny book written by two of England’s best living writers.  If you want a good laugh then this book is for you.

4 Replies to “Looking for Good Omens?”