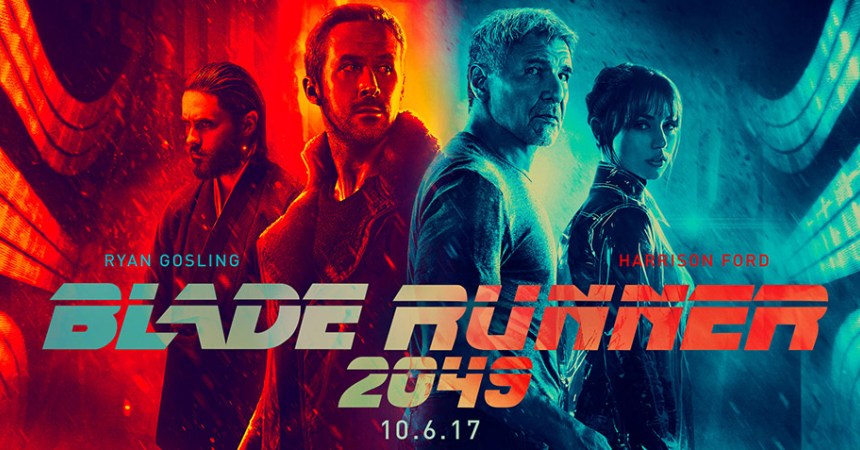 I was skeptical when it was announced that Alcon Entertainment, Warner Brothers and Sony were teaming up to make a new Blade Runner movie.  It seems like movies that are remade or get sequels decades after the original miss the mark more often than not, but Blade Runner 2049 stays true to the source material and delivers a sequel that feels much like the first movie from 1982.  Of course the flip side of that is if you found the first movie to be long, dark, pretentious and have issues with the male gaze, the same will be true of Blade Runner 2049, but if you love the first one like I do (or at least learned to love it later in life), you will probably love Blade Runner 2049.

I am not going to give away a lot of the plot, since for once the trailers don’t give too much away, but it is safe to say that K (Ryan Gosling) is a Blade Runner like Deckard (Harrison Ford) was in the original.  A Blade Runner is a police officer that hunts down and ‘retires’ rogue Replicants (genetically engineered/created slaves).  He also gets tasked with a case that takes him in way over his head.

Also like the original Blade Runner, in the grand scheme of things the plot is a pretty small story in the movie’s world.  Nothing really changes due to the events in this film.  I think 2049 may have a happier/more hopeful ending than Blade Runner, but not by much.  This is a still a future that is terrible, and no one is happy.  Especially not the Replicants who are treated like disposable garbage and are yet still resented for existing.

The performances are all muted in Blade Runner 2049.  It is like everyone is on valium.  This of course is by design.  We are not supposed to know if this is because they are Replicants or because they live in the worst future possible.  My guess is a bit of both.  Though that does add extra power to the scenes where characters do emote.  There is a reason the people in this film are breaking down.

Denis Villeneuve did a good job creating another great futuristic Film Noir Blade Runner movie.  You will either love it or hate, but I doubt you will forget it (though its long shots may put you to sleep).  In the end how you feel about Blade Runner 2049 will probably depend on how you feel about the original Blade Runner, since 2049 very much sticks to the formula that made the first one so good, or bad (though I am going with good).