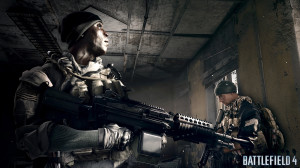 Battlefield 4 is a first person shooter developed by EA’s DICE studio.  If you have not heard about Battlefield by now, that means you have been living under a rock somewhere.  It is one of the most recognizable brands in the video game world.  It has been a rocky start for the game, but it is still fun, and worth a look.

Much like the last game, Battlefield 4 features a single-player campaign, and in it you take the role of Sgt. Daniel “Reck” Recker.  He is part of an elite squad called “Tombstone”.  You have been called in to stop a Chinese general from starting World War III, and to do that you pretty much have to shoot everyone in China.

The whole elite squad thing is kind of a misnomer since they can’t seem to shoot anything until you tell them too, and you can only tell them to shoot stuff that you are looking at and shooting anyway, but it is fun to be part of a group instead of all by yourself.  The campaign was really fun, and I was almost done with it when Battlefield 4 destroyed my save game file.  This apparently is a widespread problem, and an inexcusable one.  There have been game saves for as long as there have been video games, so to not be able to keep them from getting lost or corrupted is crazy.

All that being said the reason you will get Battlefield 4 is for the multiplayer, and that is still fantastic.  There is nothing more fun than flying a helicopter, having it almost blow up on you, so you parachute down to a skyscraper, and then having the skyscraper collapse.  You parachute down to the ground and grab a tank, and then lay waste to all that oppose you.  These sorts of moments make this game great, and they happen a lot.  Sadly EA is having trouble with its matchmaking, so getting in to games can be a little rough at the moment, but it is worth the trouble.

This game feels like it was rushed to the market to be in time for Christmas and the new console launches, and it is a shame.  If it were to have come out next month, I bet it would have been a smoother launch.  Still when you can play it, Battlefield 4 is one of the best things going right now, but I would wait another few weeks before picking it up, or just be like me and use the perseverance to build character.

2 Replies to “Battlefield 4 Is Worth The Perseverance!”