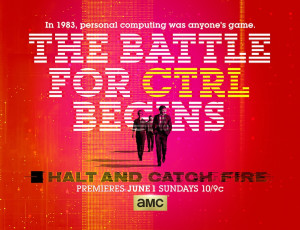 If there is one thing we should all be sure of by now, it is that AMC loves period TV shows.  Mad Men, Turn, Hell on Wheels, even The Walking Dead to an extent, and they are adding another one to the list: Halt and Catch Fire.  The name refers to a piece of machine code that will destroy the computer.  It pulls double duty here since the show is about going toe to toe with IBM by reverse engineering an IBM computer, so either IBM sues them into oblivion, or the computer they are reverse engineering will execute that code to protect itself.

This show gives off a very Mad Men vibe.  It has a strong male lead Joe MacMillan (Lee Pace) driving the show forward, and he is bending everyone around him to his will.  He will stop at nothing to get what he wants.  Even if it means destroying a profitable software company in the process by forcing them to fund his crazy venture.

They recreated the 80s perfectly.  The tone and setting are all great.  The writers also did a great job of making a show about getting ones and zeros off of a bios chip exciting, and I am legitimately interested to see if these guys can take IBM down.  I am not sure how many seasons that they can keep this going for, but it is definitely different.

The actors are quite good as well.  Lee Pace plays the main character just on the edge of being crazy, but still smart enough to get what he wants.  Scoot McNairy is believable as Gordon Clark an electrical engineer looking to make his mark, and Pace’s crazy character gives him the spark he needs.  I am not sure about Mackenzie Davis‘ Cameron Howe yet, but she didn’t get a ton of screen time, so I hope she gets to come in to her own.

AMC’s shows are not always hits, but at least they are continually trying new things.  The 80s are a fun decade to explore, and the start of the IBM clones should be cool story line.  If geeks have become cool in the last decade, then this show is as cool as it gets because it is extremely geeky.  I hope AMC can build on this great pilot.

One Reply to “AMC Wants You To Halt And Catch Fire!”