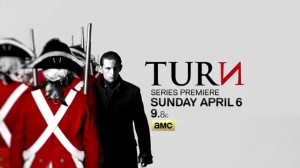 As summer TV premier week continues, I got a chance to watch AMC’s new show Turn.  It is about George Washington’s spy ring in New York during the Revolutionary War.  AMC needs something to replace Mad Men for its summer line up when Mad Men goes off the air after this season, and I am not sure Turn is it, but it definitely is interesting.

The story starts off with some American rebels getting slaughtered by the British, and just one soldier Ben Tallmadge (Seth Numrich) making it out alive.  He blames the defeat on British spies, and he is trying to get his commanding officer to allow him to start a spy ring of his own.  Meanwhile a young farmer Abraham Woodhull (Jamie Bell) has fallen on hard times, and the British are not making it any easier.  Will they join up and gather intelligence on the British?  It would kind of be a crappy show if they didn’t.

This episode felt a little long, and I know that is because a lot of it was setup, but the extra thirty minutes of run time made it drag in places.  When the story was moving forward however, it was very interesting, and I do want to see what happens next.  If they can pick up the pace a little bit, AMC will have a good and very unique show in its hands.

The cast led by Jamie Bell and Kevin McNally is quite good.  If this show fails it will not be due to a lack of acting talent, and it looks like the actors are enjoying working in this setting.

Since I can’t think of one other period spy drama on TV right now (or ever), I think AMC has a real shot at a hit with Turn.  They have earned my attention for at least a few more episodes, and that is all a TV pilot can hope for.

One Reply to “Things Take A Turn On AMC!”