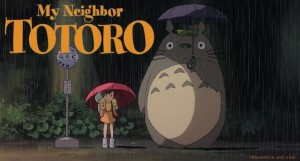 My Neighbor Totoro is film directed by the legendary Hayao Miyazaki.  It came out in 1988 in its native Japan, but did not make its way to the US until 2004, and then it was rereleased by Disney in 2006 with a new voice over.

The story follows two young girls (Elle and Dakota Fanning) and their father (Tim Daly) as they move in to a new house in the country so they can be close to their sick mother (Lea Salonga).  The girls soon meet some new friends that just happen to be forest spirits.  The largest being Totoro.

Hayao Miyazaki once again proves that he is a master of his craft.  The only negative thing I can say about this movie is that the plot is amazingly simple, and since the girls are mostly just reacting to the world around them it would be hard to call them protagonists, but it is so cute, and lovingly made that those are just minor gripes, and what kids really control what happens to them anyway.

I love pretty much every movie Hayao Miyazaki has ever done, and even then this is one of his better films.  If you want to watch something incredibly cute then this movie is for you.

2 Replies to “Can’t get a Better Neighbor then Totoro”