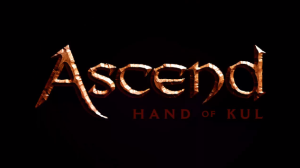 Lately I have been playing around with the new Free to Play RPG Ascend: Hand of Kul.  It is free for owners of the Xbox 360 with Gold Accounts.  It is the second Free to Play game for the system:  The first being Happy Wars.

In this game you play as a Chaos Giant in service of a new god, and you are trying to help them take down the Titians.  The Titians are the old gods that have gone mad and are just eating people.  So you hack and slash your way through the country side while occasionally throwing humans at the bad guys.

This game runs on the currency of souls.  The more you have, the more cool loot you can buy, and the more you can upgrade your spells and perks.  As you may have guessed you can get the souls two ways:  By killing bad guys and converting worshipers, or by just getting out your credit card and buying them.  They do a pretty good job of letting you earn enough souls in game to be fun, but they do taunt you with the idea of just buying cool stuff all the time.  In every menu you will see more stuff you can buy.

They also have a leveling system that allows you to gain more health and access to more powerful weapons and spells, but the catch is that you can only level up five levels unless you Ascend (It’s the title of the game!).  Every five levels you get a chance to pretty much kill your character and change him up a bit, and make him more powerful.  You can save your stuff if you want to spend the souls to add item pillars so your new character can have your gear from your last one.

The next big feature is that you are not playing this game alone.  Tons of people are playing the same levels at the same time you are and you can see them as kind of ghosts while you play.  You can curse them or bless them as you see fit, or you can even challenge them to a little one on one combat.  They of course can do the same to you.

Speaking of combat.  It is pretty standard hit with the ‘X’, hit hard with ‘Y’, spell with ‘B’, and interact with ‘A’, but it is still fun.  There are combos and stuff to mix it up a bit, but you will hit the ‘X’ button a lot.

I was surprised how much I liked this game, and I am glad that you can play it and advance without paying all sorts of cash, but it is unfortunate that you could just plop down $100 and win.  Which is clearly what they want you to do.  It is free, and that is a good price for a game, so I would suggest checking it out.