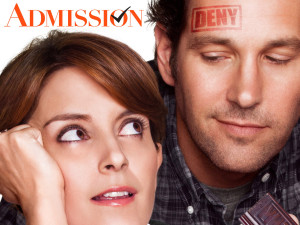 I had high hopes for the 2013 film Admission when I first saw the trailer.  I mean it has Tina Fey and Paul Rudd in it, and it was directed by Paul Weitz who did About a Boy.  Sadly the only thing this film is really good at is wasting talent.

The story follows an admissions officer for Princeton named Portia Nathan (Tina Fey) as she tries to find the best and brightest for her school.  As part of her job she goes out to high schools to advertise for Princeton, and one of her new schools is an alternative school lead by John Pressman (Paul Rudd).  He is as you guessed it the opposite of Portia.  Will opposites attract? You know they will.

Ugg this plot has been done sooo many times before, so what they try and do is shoehorn in all these random side stories:  Like Portia’s relationship with her mother, or the fact that one of the kids that is applying to Princeton might be her son that she gave up for adoption.  But they don’t develop any of it enough to care, so it is all just a waste of time.

Tina Fey and Paul Rudd do the best they can, but them being charming doesn’t fix this mess of movie.  Luckily they are both talented and in demand enough that they can just shrug off this movie and move on to better things.  Had this movie starred anyone else it would have been a complete disaster, and it might have killed their careers.

What I am telling you is that if you have ever seen a romantic comedy before then you have seen this film.  Plus it was probably better when you saw it before.  The leads are likable, but that is about it.  Save yourself some time and watch just about anything else before seeing this movie.