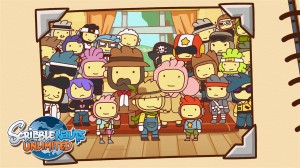 The story is about a young boy Maxwell with a notebook that can create anything he writes in it, but this has made him spoiled.  One day he meets an old man who wants some food, so Maxwell plays a trick on him and creates a rotten apple.  The man is angered by this, and puts a curse on his sister that is slowly turning her to stone.  The only way to fix the curse is to do good deeds for people and collect the Starites that appear when they are happy.  Get enough Starites and save your sister.

The gameplay is very simple.  You walk around and find a challenge or some unhappy people and create things that fix the problem or make the person happy.  You can create just about anything provided it is not copyrighted or vulgar, unless you get the Wii U version and you can summon Nintendo characters.  You can also edit the objects/people around you by either adding adjectives to change the object’s attributes: For instance if you see a beggar you can add that he is a rich beggar, and he will have a bunch of money.  You can also edit them in a truer since by opening the object editor that looks a little like MS paint and change all of the object’s attributes:  Like turning a phone booth in to a flying phone monster.

The one problem with all this power is that it makes the game pretty simple, and for me the biggest challenge is just remembering how to spell what I want to make.  However, it is still very fun just to see what crazy things I can come up with to fix the problem at hand.  The graphical style is quite charming as well, and makes the whole world just fit together.

This game is quite good, and if you have not played a Scribblenauts game before this seems like a good place to start.  It works quite well on the PC since you can use the keyboard to type out your commands.  Due to its low difficulty, it makes it the perfect game to just relax and play around with, or let younger gamers exercise their creativity.  I think the game is currently $20 on Steam, but it is always going on sale, so it can be an affordable addition to your game library.

3 Replies to “Use Your Imagination With Scribblenauts Unlimited!”