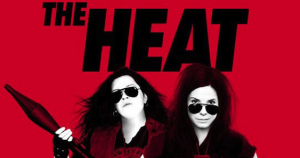 It is believed in Hollywood that movies headlining women can’t make much money, but Frozen and The Heat have done their best to disprove that misconception.  The Heat came out in June of 2013 from 20th Century Fox, and is your typical foul mouthed buddy cop movie, but the twist is that it stars two women.  Not just any women, but Oscar winner Sandra Bullock, and comedy “it girl” Melissa McCarthy.  They were a blast to watch in this movie.

The plot is pretty much the same as any other buddy cop movie:  Straight laced by the book FBI Special Agent Sarah Ashburn (Sandra Bullock) has to work with a foul mouthed slob of a local Detective, Shannon Mullins (Melissa McCarthy).  Together they have to take down a high profile and mysterious Boston drug lord.

Despite the fact that this movie has been made like 3,564,456 times, the writers pack enough jokes and action in the movie that you will be too entertained to care.  They really went all out with this movie, and didn’t treat it like just another generic buddy cop flick.

The two leads are fabulous in this movie.  They play off each other perfectly.  Whoever had the idea to put these two together, I hope is rolling around in all the money this movie made because they deserve it.  There is not a scene that doesn’t have a laugh or twelve.  Bullock and McCarthy know how to be funny, and they really know how to be funny together.  I could see The Heat becoming the next Lethal Weapon franchise.

I think you can tell that I liked this movie.  Like all comedies, not all of its jokes land, but there are so many of them, and so many good ones that it more than makes up for the couple duds.  I know Bullock has had trouble with sequels in the past (Speed 2, Miss Congeniality 2), but I would love to see more Heat movies.