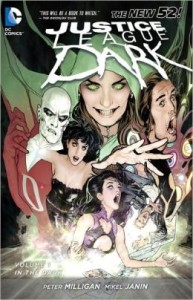 Since I gave my casting choices for the Justice League Dark, I thought I would post a review for the New 52 DC re-launch. Peter Milligan has done a great job with this book.  Especially showing why the JLD is necessary with the existence of the normal Justice League, which contains some of the most powerful beings in the universe.

The story starts out with Madame Xanadu talking to herself about the main members of what is to be the JLD, Zatanna, Deadman, Shade: The Changing Man, and John Constantine, and how she needs to bring them together to stop a great evil.  While this is happening a girl named June Moon seeks out Deadman because the Enchantress is after her.  The Justice League tries to defeat the Enchantress, but their strength is no match for the power of her magic.  Only people that understand magic can hope to defeat her.  Will the members of the JLD unite in time to stop the craziness of the Enchantress?

This book does a great job of not needing to do an origin story for each character, but instead having them reveal the important parts about their past as the story progresses.  It is also fun to see the normal Justice League get their butts handed to them, and having no idea what to do.  I like that the book that doesn’t deal with standard superheroes.  These people don’t really see themselves as heroes, and they are not even sure that they like the people they are working with, but if they have to deal with them or have the Earth be destroyed, they will make due.

DC did a good job getting a smart writer in Peter Milligan to update this book.  Plus it brings a lot of good Vertigo comic characters in to the main line, and DC could use some good none A-Type heroes in their universe.   I will be checking out more JLD volumes in the future.