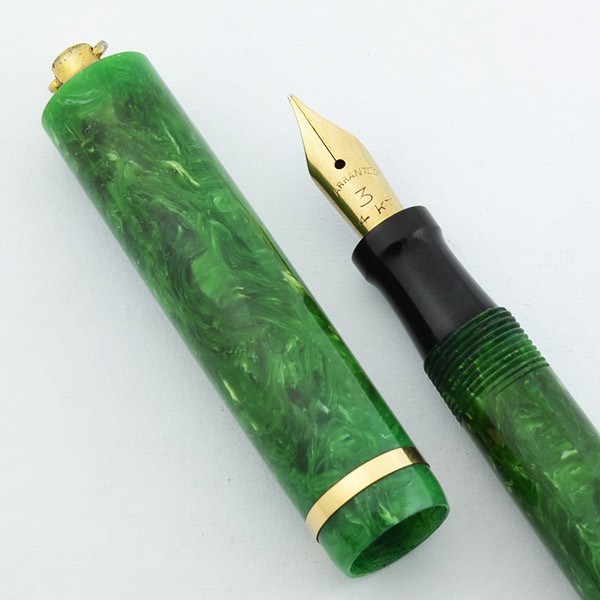 How about a little short fiction this morning? No?! Well who asked you!

It started when I was at a garage sale.  I had spent money earlier that day on a Sega Master System (money well spent), but I saw a sign for just one more rummage sale on the way home, so I was looking around on the 25¢ and free table.  There was the usual collection of junk:  broken toys, scratched workout DVDs, and more than a couple well used ash trays, but before I was about to leave I noticed a jade box.  Or what looked like a jade box.  There is no way a real jade box would be 25¢, or so I thought.

I picked up the box and looked at it.  It seemed real enough.  The stone felt cool and smooth to the touch, and it was heavy like a rock box should be.  I lifted the lid and there was a jade pen sitting on a bed of satin.  Surely this pen and box were in the wrong section, or maybe there was something wrong with the pen.  I went to grab the pen, but as soon as I touched it I felt cold.  Like I had jumped naked in to a snow bank.  I pulled my hand back.  “It is November, there must have been a breeze”, I muttered to myself.  I reached back in and took ahold of the pen.  I was cold again, and the weight of the pen was all wrong.  Not the weight exactly, the pen seemed like it had the right heft, but it felt so much heavier.  My hand was holding it with ease, but it was all I could do to hang on to it.  I put the pen back and closed the lid.  Willing my body to warm itself.

“There is no way I am taking this thing home!”, I thought defiantly, but just as I was setting the box back down on the table I heard a soft far away voice, “help us…”.  It was the voice of a child.  I looked around to see who had said it, but there was no one there.  No children, and oddly no other shoppers either.  I looked back at the box and flipped it’s lid then reached down and touched the pen with my index finger.  This time the voice was nearer and louder, but all it said was, “Please!”.  I dropped the box.  It hit the driveway with a thud, but it didn’t break or chip.  It just sat there, and if I didn’t know better I thought it was looking at me.

My mind raced.  I didn’t even want to pick it back up, let alone take it home, but that voice.  It sounded scared, alone, and it said ‘us’.  There was more than one person in trouble.  I reached in to my coat pocket and pulled out some gloves and put them on.  Then I gingerly picked up the box.  I walked up to the cashier’s table, but as I approached the woman looked at me with panic in her eye’s and said, “It is free, just take it!” I nodded, “Trust me, I am not paying for it! But before I go, I need to know everything there is to know about this pen”.