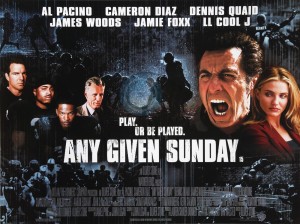 Any Given Sunday is a movie about Pro Football written by and directed by Oliver Stone in 1999.  I had always heard this movie had great speeches by Al Pacino, so I thought since it was football season I would give it a shot.  I wish that I hadn’t.

The movie follows the season of a fictional football team the Miami Sharks.  They are members of the fictional Associated Football Franchises of America.  The film in general follows Jamie Foxx as Willie Beaman as he tries to usurp legendary QB Jack “Cap” Rooney played by Dennis Quaid.  Al Pacino plays the Hall of Fame coach Tony D’Amato trying to hold the team together while the team makes its way through this transition period.  Oh yeah, Cameron Diaz plays the evil owner Christina Pagniacci who is trying to move the team to LA.

The problem with this movie is that all the people just play their stereotypes.  They don’t really veer from them at all until the end when they change and everything is happy.  You know, when they are supposed to: Jamie Foxx plays the young arrogant kid who lets fame get to his head; Dannis Quaid isn’t sure if he still has it; Cameron Diaz is all about the cash; and Al Pacino is the world weary coach who just wants to win one more time.  You can guess their story lines from there, and it plays out almost exactly like you would imagine.

That being said, they do all fit their roles, they just don’t elevate them at all, and that could be because Oliver Stone doesn’t give them anything to work with.  It is probably a combination of the two.  If you are looking for a generic football movie then you have found it.

It also is super 90’s, but not in a cool retro way, but in an awful nonsensical way.  Random flashes off pink colors.  Everyone looks like they just fell out of a Boyz III Men video.  It is hard to watch.

The only reason to watch this movie is for Al Pacino’s speeches.  If he could give me a speech every morning I could rule the world.  They are awesome, and it brings Al Pacino’s character to life, but sadly they take up like twenty minutes of this almost three hour long flick.

This movie falls flat, and it hasn’t aged well.  I am sure Oliver Stone wanted to make a glorious exposé on America’s most popular sport, but it ends up being just another football flick with some decent action and a few great speeches.  I would spend your Any Given Sunday watching something else.

2 Replies to “Spend Your Any Given Sunday Somewhere Else!”