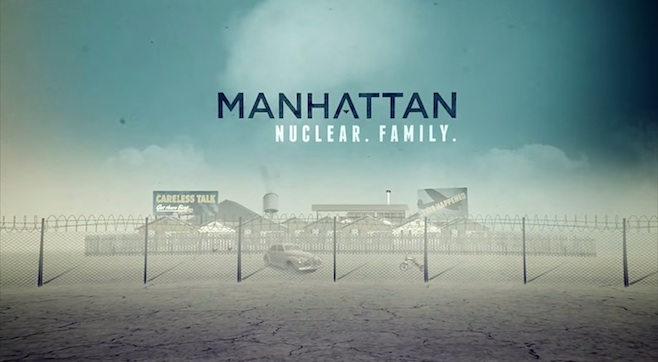 It has been kind of a slow summer, so it is always fun to find a new show to watch.  My wife recently found out that even though Comcast doesn’t broadcast the channel WGN America it does have their shows On Demand, and one of those shows is Manhattan.  It is not about the burrow of New York City, but rather the Manhattan project.  Which as you know is where they created the Atom Bomb (You did know that right?).

The show doesn’t strive for historical accuracy, but since so much of it is a still a secret I am not sure how accurate they can be.  However, it is interesting to watch these scientists try and outsmart each other all while trying to end the war before more American lives are lost, and they are driven by the fear that the enemy will create the bomb first.  They think they know how destructive the bomb can be, but they are unsure and it scares them.  Plus the government is so scared that secrets will leak out that the scientists and their families are under constant scrutiny.

I don’t think this show will win any awards, but it is not the type of show that comes around a lot, and definitely not one that is made by a small Middle American regional channel.  I have been enjoying watching it, and I think that you would too.  Hey what else do you have to watch this summer?