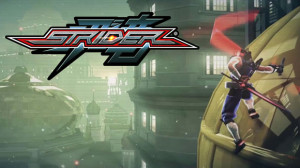 Strider, the game from the now Amazon owned Double Helix and published by Capcom, was not really on my radar, but when I heard that it was a Metroid clone in the vein of Shadow Complex, I was very interested.  Plus I had several Microsoft Bing Points gift cards to use, so I went for it.

The story is really simple.  You are Strider Hiryu a future ninja assassin tasked with killing The Master.  First you will have to battle your way through a fictional Eastern European city gaining new powers, and slaying tons of bad guys and bosses.  The more bosses you kill, the more powers you get, so can advance further on your quest.

I guess there is more to the story than that, but it kept popping up in the bottom of my screen while I was killing hundreds of robots, so I didn’t really keep track.  But it has that awesome 80’s-90’s nonsensical feel to it, and as a child of the 80’s I can tell you that Soviet bad guys are right up there with Nazis in my book.  They are just so easy to hate.

What I love about this game is how fast it is.  You can attack as fast as you can press the “X” button.  The other attacks may be a little slower, but I never felt like I was failing because of the response time.  By the middle part of the game you get so many powers you really feel like an awesome ninja.  It is great.

I never really paid much attention to Strider when I was younger, but I do remember Ninja Gaiden and Shinobi, and Strider feels like their brother, so it kicks the nostalgia in to overdrive making the game just that much more fun.

By default since this is a Metroid-like game, there is a lot of back tracking once you get a new skill that opens up new doors and looking around for random power ups, so that can get tedious at times.  Some of the bosses can get a little cheap until you find their pattern, but those are just minor annoyances.

I have had a lot of fun with this game, and it is more than worth the $15.  It is out on just about every major platform, so if you are interested there should be nothing stopping you from playing it, and I recommend it whole heartedly.  Especially if you fondly remember your side scrolling adventure game days.

One Reply to “Strider Is Back And In HD!”