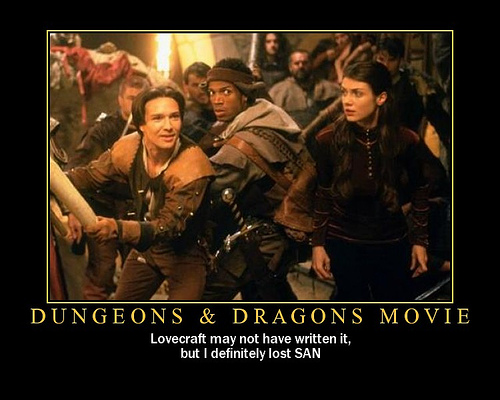 Warner Brothers after much legal wrangling has gotten the rights to make a new D&D Movie.  I am less than excited.  I love that another big budget fantasy movie being made, but not one based off the Dungeons & Dragons franchise.  Sure there have been a couple of good D&D books written to base the movie off of, people swear by The Legend of Drizzt for instance, but most of the books are more like The Dragonlord of Mystara.   Which is to say terrible.  I may get in trouble for saying this (some people love their D&D lore), but you don’t play D&D for the great stories that were written about the D&D universe, you play D&D for the stories you and your friends make in the D&D universe.

D&D is about having a good time with your friends and trying to brake the GM’s will.  To see if you can take the story he is building somewhere completely different, and to try random stupid things with your character’s skillset.  Now there is a good movie you can make about that, and the movie The Gamers: Dorkness Rising comes close, but that is not a movie Warner Brothers is going to throw a bunch of money behind.  The number of people who want to watch a bunch of nerds play D&D and then zoom in to the action in their minds is limited.  Like pretty much me, and the guys making the “The Gamers” movies.  They could even try and make a Jumanji style movie where the players were sucked in to their story and they had to complete the campaign to return home, but that would still will not sell to the masses.

So instead we are going to get another attempt to try and turn the D&D universe in to some giant sweeping epic with people quoting their dialog like Shakespeare, and other people Wayansing it up to try and add life to the picture.  (As an aside I don’t blame Marlon Wayans for the D&D movie, he was doing what could with what he had.  Which was nothing.  Maybe less than that even.)  I will no doubt watch the production of the D&D movie with interest, but Warner Bros is going to have to role an 18 or better to make a decent film, and after the last two outings their dice seem to be producing a lot of natural 1s.