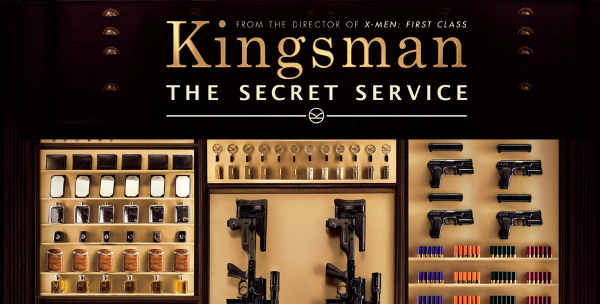 So lets say you are Matthew Vaughn, and that you just saved the X-Men franchise with First Class, but since Singer has returned to X-Men for Days of Future Past what do you do?  Work on a new comic book franchise of course, and the more British the better!  That is how we got Kingsman: The Secret Service.  A fun spy move from a guy that you can tell loves fun spy movies.

The story is about young man, Gary “Eggsy” Unwin (Taron Egerton), who is given the chance to join the Kingsman.  An elite private spy organization started by a bunch of wealthy English men with no heirs thanks to World War I with the desire to stop large scale warfare from happening again.  This new recruit will have to prove that despite his lower class upbringing he is just as good as the upper crust of British society, and maybe, just maybe, save the world.

Even though the poor kid from the streets that proves he as just as good if not better than everyone else story has been done to death, Vaughn managed to keep this light, and delightfully over the top.  Vaughn made sure to cram everything he loves in to this movie.  Crazy action, in your face violence, and silly characters.  His excesses also keep this movie from being great.  While it is good fun, it is hard to get too emotionally or thoughtfully invested.  It is just Vaughn showing you stuff he likes.  Luckily he likes cool stuff.

Colin Firth deserves a lot of credit for making this film enjoyable as well..  He is able to play “Galahad”, one of Kingsman’s best spies, with so much British charm that the movie lights up every time he is on screen, so with him guiding the young main character, there is no way this couldn’t have been good.  New talent Taron Egerton does a good job, but pretty much he just has to do his best to be amazed all the time, and then react to the stuff going on around him.  With the next movie he will have to do more.

The fight coordinators deserve a special shout-out as well.  There are some great fights in the film.  They are well captured, and filmed in a way that you can see what is going on.  Really good work.  I can’t wait to see how they up the ante next time around.

I enjoyed my time with Kingsman: The Secret Service.  It kept me entertained the whole way through.  It managed to be light hearted and hyper violent all at the same time.  It never quite gets to that upper level of amazing films, but that doesn’t mean you will not have a good time.  Though if blood offends you, you may need to get your spy fix somewhere else.