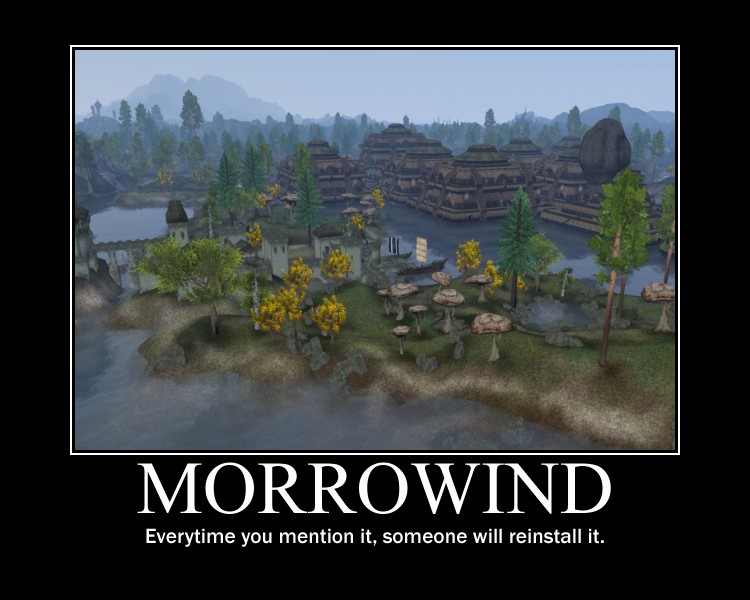 Thanks to The Elder Scrolls Online announcing the new Morrowind expansion, I got a little nostalgic, and I decided to fire up The Elder Scrolls III: Morrowind and relive one of my all time favorite games.  It was not an easy process.  The first problem was that Morrowind was not designed for 64-bit computers with more than 4GB of RAM, so I had to get a mod to get it working.  Then due to the high resolution of my monitor (according to Morrowind), I had to download a new font pack, and since I was doing all that anyway, I decided to download a few mods that tweak the game’s gameplay balance, fix bugs, and improve the game’s visuals and sound.  Two hours later Morrowind was up and running on my PC.

I was ready to dive in.  All I had to do was open the trap door to the prison boat I was on…  It took about me about 30 minutes to figure out that the the ‘use’ button and the ‘activate’ button are different (The first time I played Morrowind was on the Original Xbox).  It turns out you ‘activate’ people and doors with spacebar.  The game did not tell me this, and who in their right mind uses spacebar for anything other than jumping.  All the default controls were wonky.  I mean right click brought up the menus instead of switching to magic, so after another 30 minutes of remapping my controls I was able to complete character creation and start playing the game.

Of course all the mods I had installed were not optimized, so my frame rate was swinging between 200FPS and 15FPS, so I had to do some tweaking to get everything to stay above 30FPS.  I have never had a game that looks so bad, run so poorly, but after looking in to the forums I found out the frame rate is just a problem with Morrowind on PC in general, and not my mods.  It turns out 15 years ago developers couldn’t imagine a world with 100% draw distance.

Four hours in to my quest to play Morrowind something happened, I got lost in it all over again.  I just want to go home and play it now.  The combat mechanics are sketchy, the graphics didn’t hold up, and the story is still trash, but the world of Morrowind is still one of the best ever made.  Skyrim and Oblivion have normal generic fantasy worlds (Oblivion did have its gates I guess *shudder*) , but Morrowind with its mushroom forests, boggy swamps and gray deserts are so unique and imaginative that I want to see every nook and cranny.  It is so delightfully weird, and no game will ever match the shear amount of loot you can find and use.  SO MANY EQUIPMENT SLOTS!

Most of Morrowind has not held up well, but the world is still amazing, and the loot hound in me wants to make sure I have every slot of my character filled up with something magical.  I would pay sooooo much money for a new special edition of Morrowind, but I don’t think it is ever going to happen.  Morrowind is a game for the ages, and the game that turned me in to an RPG player for life.  If you have never played it, I doubt you would be able to look past its flaws, but for those of us who have 15 years of nostalgia built up, this is still one of the best RPGs ever made.