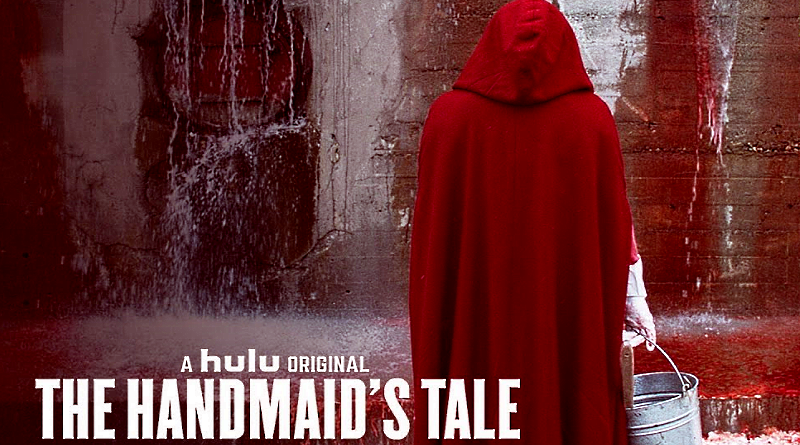 The Handmaid’s Tale is a terrifying show produced by Hulu, but it is not terrifying because of a ghost or a psychotic madman but because it shows a future to the United States that for some seems unfortunately possible.  While it would take a lot for that future to take place, you don’t have to look too hard through history to find examples free nations taken by tyranny: Iran, Venezuela or everyone’s favorite villains Nazi Germany, just to name a few.  It turns out that desperate people make bad decisions.

In the not to distant future most women in the world have become unable to have children, and this sends the world in to a downward spiral.  A Pseudo-Christian group has used the unrest in America to take over, and the women that are able to have kids are forced to breed with the leaders of this group to give those men and their wives children.  These unfortunate women are called Handmaids.  The show follows a Handmaid by the name of Offred (Elisabeth Moss).

The Handmaid’s Tale never backs away from anything.  It shows this bleak future in unflinching detail.  While I know some Christians are upset at the show because they are worried people might get the wrong idea about Christianity, you don’t have to know much about Christian theology to know that rulers of ‘Gilead’ (The Former USA) have warped the Bible for their own evil purposes.  Which is probably why most people in Gilead aren’t allowed to read the Bible.

A show about institutionalized rape would be hard to believe or get in to without good performances, and thankfully The Handmaid’s Tale has a lot of talent on screen.  There aren’t many weak performances, and Elisabeth Moss is able to work her way through the wide array of Offred’s emotions almost perfectly.  Considering about half of the show is just Elisabeth Moss close ups, she does an amazing job getting the audience to feel what Offred is going though.

The Handmaid’s Tale is not for the weak of heart, and it shows the fall of the USA, which some people may take issue with, but sadly The Handmaid’s Tale uses the past for its version of the future, so we would be wise to listen to what it has to say.  Even if we reject its conclusion.  The Handmaid’s Tale is worth watching if you have access to Hulu, or maybe just paying for Hulu for a month to watch it.  Who knows, you may even get through the show during your seven day free trial.