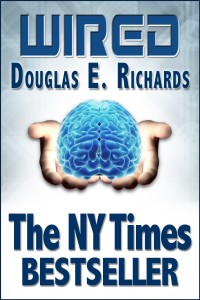 I don’t read a lot of thrillers, but I will give one a chance occasionally if it involves a lot of Sci-Fi or fantasy.  Wired the 2010 book by Douglas E. Richards has the former.  Its premise is that the human brain can be used to its full potential by using a series of viruses to reprogram it.

The story follows a former special forces operative named David Desh who is called out of retirement to capture a bio-terrorist.  As with all thrillers, things are not as they seem, and he might not be the one doing the hunting.  DUN DUN DUN!  Can he save the world before it is too late?

Like I said in the opening paragraph, I don’t read a lot of thrillers, mostly because I hate plot twists for the sake of plot twists, and thrillers tend to do that a lot.  This book does have a few twists and turns, but none of them felt forced, and Wired keeps the action turned up to eleven, so I can’t forgive a few minor story shifts.

It is well written, so apparently Richards knows his craft, and I didn’t see any glaring plot holes.  Well with the exception that the premise is probably false to begin with, but that has never stopped me from reading a book before.  I may have to check out his other work.

I got this book because it was free on the Kindle lending library, but I quite enjoyed myself.  I guess it is good to try something different every now and then.  Heck I may even have to check out Wired’s sequel Amped.

2 Replies to “Shmee gets Wired!”