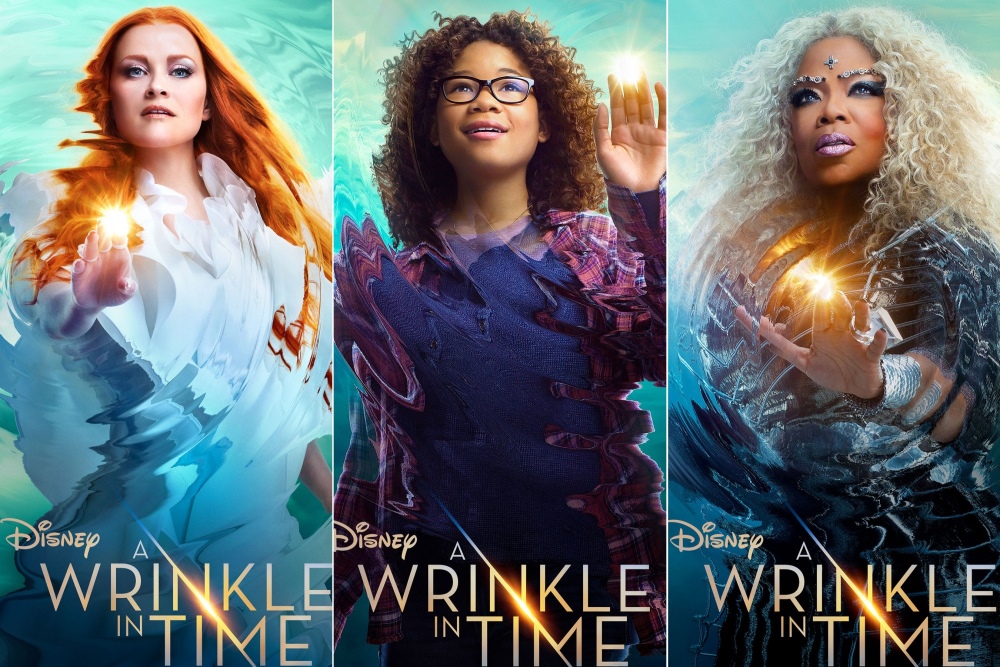 A Wrinkle In Time is a favorite from my childhood.  It was read to me when I was very young, and then I read it by myself latter, multiple times, so it was never a mystery to me why it was never made in to a major motion picture.  It is a weird book, and it would take a lot of effort to get right, and it would probably not get a lot of return on that effort.  Unfortunately for Ava DuVernay, her A Wrinkle In Time gets so caught up trying to wow us with magic and wonder that it doesn’t tell an engaging story.

The plot for the movie is similar to the one from the book.  Meg Murry (Storm Reid) has been a troubled kid since the disappearance of her father (Chris Pine) four years prior.  A scientist who believes that you can travel the stars with only your mind.  It turns out that he was right, and he is lost in the stars, so Meg, her brother Charles Wallace (Deric McCabe), and friend from school Calvin O’Keefe (Levi Miller) will go out to look for him with the help of the Mrs.’.  A group of space traveling supernatural beings, and Oprah.

Obviously since I love the book, I have no real problems with the plot of the movie.  The problem is that it is a little threadbare.  We know that Meg has issues, and that she has to deal with them so she can be a ‘warrior’ and find her father, but I am never sure that she really does.  A Wrinkle In Time says Meg does, and she does get less grumpy, but really she just moves from place to place while a giant Mrs. Which tells her affirming things.  When in actuality it seems like only The Happy Medium (Zach Galifianakis) gives her any useful advice.  Letting her know that it is okay to be scared of the answers to life’s questions, but that shouldn’t stop you from asking them anyway.

You would hope that with the story having issues that maybe the spectacle would make up for it, and they tried.  A $100 Million budget allows you to do whatever you want, but not well enough to not look cheesy.  Someone should have come along beside DuVernay and told her that she should scale things back a bit.  Like maybe have Oprah be normal sized, so the visual effects artists don’t have to do a poor job of digitally painting her on to the scenery, and so she can better interact with the other actors.  It is not just Oprah though, nothing ever looks 100% like it should, which is a shame.

The actors are all okay.  Though they are not given a lot to do except smile weirdly or look amazed while caught in an extreme close up.  So close.  If a child’s face doesn’t fit on a movie theater screen, you need to back up the camera a bit.  Storm Reid does her best to show Meg’s transition from troubled to ‘warrior’, but she doesn’t quite get the scenes necessary to make it work.  However, they did manage to pull it all together for an emotional punch at the end.

I wanted to love A Wrinkle In Time, but instead it was merely okay.  It had parts that worked, but they get lost between the poor plotting and bad CGI.  Kids will probably still like this movie, and it is fine family fare, but this is not the classic that I am sure Disney was hoping for.  That way they could green light the next four books.  I am sure that in ten years Disney will try again, and maybe then they will get it right.