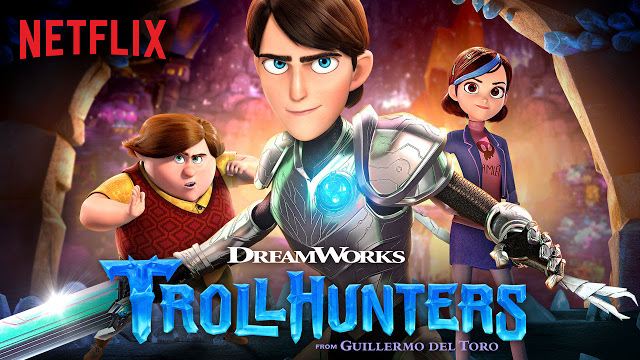 I am a huge Guillermo del Toro fan, but his new show Trollhunters just doesn’t seem to click with me.  It has a cool visual style that I love, but it is just missing that hook that makes me want to keep watching.

The series follows Jim (voiced by the late Anton Yelchin), the first human ever to be name Trollhunter, as he learns about the troll world and how to protect the world with his new powers.  Meanwhile a threat is growing for both troll and man, and ready or not Jim is the only person who can stop it.

It is the standard good kid becomes a superhero plot, and of course his friends have to help him on his way.  I think this is why I am having so much trouble with Trollhunters.  It all feels so familiar.  Like I said, visually it I a homerun.  The cave world of the trolls in particular is amazing.  I just wish some tropes were turned on their heads is all.

To be fair I haven’t finished the show, but that is because I am having a hard time staying interested.  With twenty-four episodes it is twelve hours of TV to watch, and I already have a lot of TV to catch up on, so if the hook of the show isn’t great in the first few hours, I am going to have a hard time finishing it.  Something tells me if I was in the target demographic I would probably love this show.  Maybe I will have time later to finish this show, and I will change my mind.  You will be the first to know if I do.

2 Replies to “Shmee Gets Acquainted With The Trollhunters!”