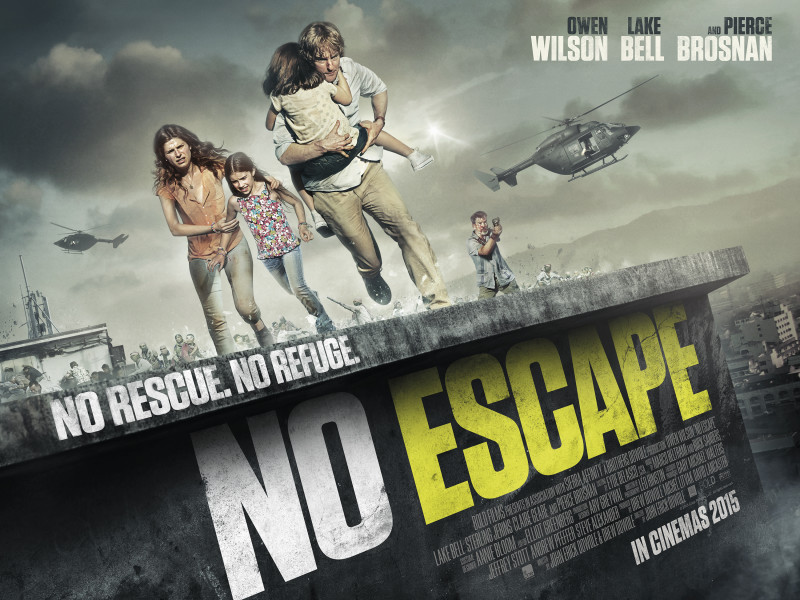 Well this is an odd turn, I get to tell you my thoughts on a movie before its official release.  Sure it is a movie almost no one has ever heard of, but still maybe this review will be of use to someone.  Hah! Who am I kidding no one reads this blog.  Anyway… the movie in question is No Escape by John Erick Dowdle, and being distributed by The Weinstein Company.

Businessman Jack Dwyer (Owen Wilson) needs to get his family out of a Southeast Asian country after a violent coup.  The militants are killing any foreigners or government loyalists they find on site.  The Dwyers will need to get lucky and have a little help from a foreign operative named Hammond (Pierce Brosnan).  Otherwise there will be No Escape! (See what I did there!  Pretty great if I do say so myself.)

That is pretty much the whole movie.  The Dwyers are chased by militants.  Basic plots can work well for films like this, but No Escape’s problem is that it can’t figure out what kind of film it wants to be: gritty thriller or jaunty action film.  So the tone is all over the place.  One second people are telling jokes, the next they are showing you something truly terrible.  It is kind of jarring.  If you are going to go gritty and dark go for it, make everyone gasp in horror, or if you are going for a light weight thrill ride, commit so the audience can settle in and enjoy themselves.

Since they pretty much cast a whole country as the villain they decided like halfway through the film to have Pierce Brosnan’s character just info dump what the coup was all about.  That way you can empathize with the horrible violence?  I guess?  Speaking of Brosnan, his character was definitely part of a jaunty action movie, and I think I would have liked his movie better: cracking wise and shooting bad guys.  It would have been clichéd as all get out, but fun.  Owen Wilson’s thriller was okay, but it was a little dull.  Based on some of Wilson’s jokes, I think he would have liked to be in Brosnan’s No Escape too.

One last thing I really have to mention, if you can’t handle shaky-cam filmography stay far away from this film.  My friend had a hard time getting though No Escape, and he ended up almost as sweaty as the characters on screen.  The camera shakes around so much it was hard to see what was going on.  Sure the fact that since seating was limited we had to sit right up front did not help, but sitting further back would have just made it a less nauseating blur.

In the end No Escape wasn’t a truly bad film it just couldn’t figure out what it wanted to be, and that kept it from being good.  I don’t regret watching this movie for free, so I guess my recommendation is to wait until it hits the streaming service of your choosing.  Due to the weak advertising campaign, complete lack of buzz, and late August release date you probably won’t have to wait long.