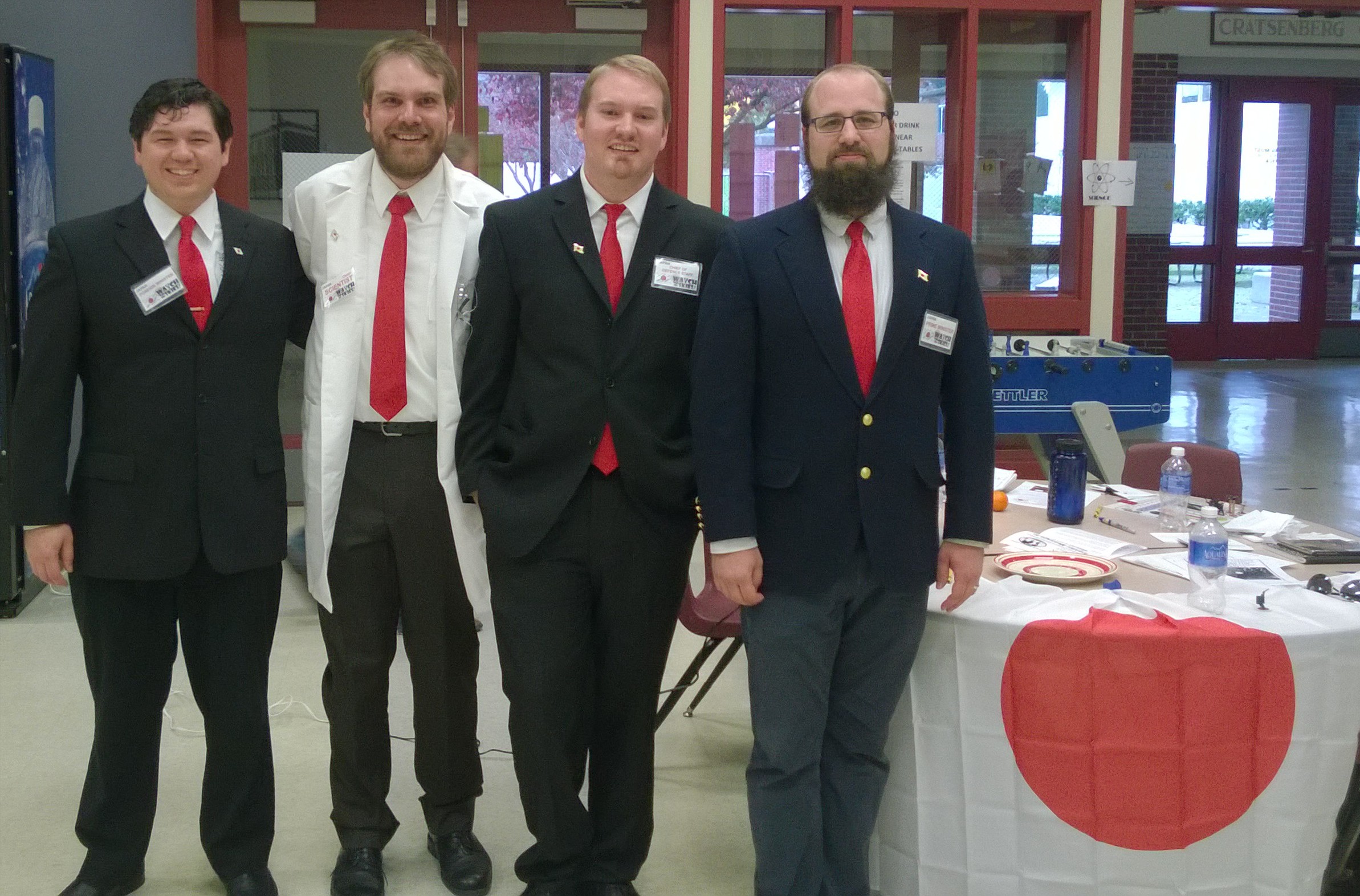 Over the weekend The Swashbuckling Samurai, The Paladin, Black Raven, and I took part in the MegaGame known as Watch the Skies.  If you have never heard of a MegaGame before, just think of the Model UN as a kid, or a Mystery Dinner at a friend’s house, but crazier.  I can’t really talk about what happened in this game without spoiling a few things about Watch the Skies, but that is part of the fun because people’s goals change every time, in theory the game changes every time (I say in theory since I have only played once).  None the less I will give an overview before spoiling anything.

The game starts with the countries (teams) going over their given goals, or if you are the Aliens getting sequestered away.  For now think of the Aliens like another country that no one gets to interact with.  The goal for Japan, be a tech leader and right the flagging economy.  Then inside your team you have different jobs.  We played a four player team game, so the roles were, Head of State, Foreign Minister, Military Commander, and Chief Scientist.  These roles come in to play during the rounds.  There are twelve rounds each thirty minutes long.  For the first fifteen you meet with the other countries’ team members with the same roles and then for the next fifteen you meet with your team and discuss what you want to do.

The Head of State has a board where they assign the country’s resources (i.e. money), he also wanders to other tables and talks to other Heads of State to try and figure out what they are up too.  The Foreign Minister heads to the UN Council room to try and keep the country liked while trying not to get his team tangled up in all the nonsense the game makers throw at you.  The Military Commander goes to the world map and moves his troops and fights skirmishes with the Aliens and maybe other Commanders, and from those skirmishes gain loot and tech which he gives to the Chief Scientist.  The Chief Scientist in turn tries to make cool stuff with all the loot with the help of his fellow Scientists through trading and deal making.  In board game terms it is like Settlers of Catan with more lying.

Now that you kind of know what is going on I am going to share my experience so you know: SPOILERS (maybe) !  I was the Chief Scientist for our group and we decided early on that we were going to try and make Gundams (giant Anime robots).  Since we figured that this was a great way to gain a tech advantage and it would give us something to sell.  Now giant robots with teenagers in them is not part of the game proper, but that is were Watch the Skies really comes in to its own.  The Controllers (game runners) got together and came up with new rules that let us try and figure out how to get this done.  If you have an idea in Watch the Skies, the Controllers will do their best to try and let you do it.

So for me I was begging Black Raven our Military Commander to get me the parts so I could try and make these robots, but at the same time I was trying to play it cool in the Science area, so that people wouldn’t catch on.  That all changed half way through the game when the USA announced the existence of Aliens to the world, so all the resources started to get snatched up for other projects. I had to come clean with my project stating that it would be a great anti-alien weapon hoping to snatch needed tech.  While that was happening a Controller pulled me aside and informed me that I was an Alien, but not the kind that was hovering above Earth.

So while I was trying to build robots, now to help the Earthborn Aliens escape, I was also giving away my country’s unneeded tech to the underground Alien cause.  Lucky for my team, I didn’t have too much unneeded tech, so I didn’t give much away.  Towards the end of the game I came clean with the rest of my team, fearing death, but I needed their help.  It turns out that The Paladin, our Head of State, was also an Alien, and he had been giving our money to the cause.  The Black Raven and The Swashbuckling Samurai our Foreign Minister instead of assassinating us did their best to try and helps us.

We completed our Gundams at the last moment, but it turns out the USA sent a secret agent to disable them, so they weren’t able to help us out.  During the last military round China put a huge spaceship on the board since it turns out they also had Aliens living among them, and they built it for all of us to escape on.  Though The Paladin and I decided to stay behind because we had done a good job making Japan great.  The Swashbuckling Samurai on the other hand was on it just because he wanted to be.  Sadly the large Alien group and the other countries shot it down.  We were close, but it didn’t quite happen. An exciting end!

You will notice that I didn’t motion what the Foreign Mister was up too, that is because I was never able to go and visit the UN and see how that worked.  I am sure the Swashbuckling Samurai did a great job.  Also it turns out during this game that Brazil became a full blown superpower, uniting all of South America.  We (Japan) had no idea!  So they played a great game.

If you ever have the chance to play Watch the Skies, go for it.  It an amazing amount of fun, and you will get to meet a lot of new people.  Thanks to Bellingham MegaGames for putting this on!

One Reply to “Shmee Enjoyed Watching The Skies!”