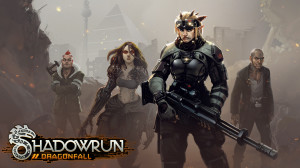 Last year Hairbrained Schemes released the Kickstarter funded game Shadowrun Returns, and I loved it!  This year they have released an expansion called Shadowrun: Dragonfall, and while it is still pretty much the same game mechanics wise, some small updates have made a world of difference.

The biggest change is the fact that you can save just about anywhere, and if you get the Dragonfall update it will allow you to save anywhere in Returns as well!  They also did a better job of introducing a cast of characters that are with you for the entire story, so it feels more like the table top version of Shadowrun that we have all come to know and love.  Also the base feels more like a base instead a random location that you show up at from time to time.

This is no small DLC mission either.  It is easily the same length, if not longer, than Shadowrun Returns, so even though $15  sounds like a lot (since I backed it on Kickstarter it was free for me “Yeah Me!), at least they are giving you a lot of content.

I was kind of bummed that I had to play as a new character, but being forced to start over has allowed me to fix my leveling mistakes from before, and play this new location differently.  Being from the Pacific Northwest I probably shouldn’t be saying this, but Germany has been more fun than Seattle.

This update makes Shadowrun Returns worth playing again, and it addresses one of the main issues that most people had with the game with the save anywhere feature.  If they really wanted to win back players they would release the save fix for free, but people at least have the option to get it if they want it.  If you are looking for a fun turn based RPG to play, Shadowrun: Dragonfall is a great option.

One Reply to “Shadowrun Returns with Dragonfall!”