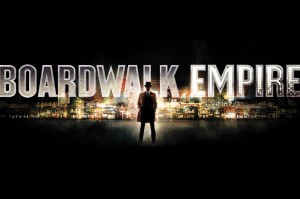 Boardwalk Empire is a about Prohibition era Atlantic City created by Terence Winter, and its executive producer is Martin Scorsese.  It is the crime drama that HBO used to fill the shoes of The Sopranos, but from what I have seen of that show, this one is better.

The show starts just as Prohibition is starting, and crooked politician Enoch “Nucky” Thompson (Steve Buscemi) is going to use all his contacts and favors to keep Atlantic City’s booze business going.  This of course gets him involved with gangsters.  The longer the show goes, the deeper in to the crime scene Nucky has to go.

It is a fun show, and Steve Buscemi is great in this.  It is good to see him get to be the star in something, but like most HBO shows they try and be too edgy too much, even when it doesn’t add anything to the scene, but it is not as bad Game of Thrones.

I like shows and movies about 1920’s gangsters, so this show was kind of made for me, and it is a much more interesting time period than the current day based Sopranos.  So if you are looking for a good crime drama than this could be for you.

One Reply to “I Visit The Boardwalk Empire”