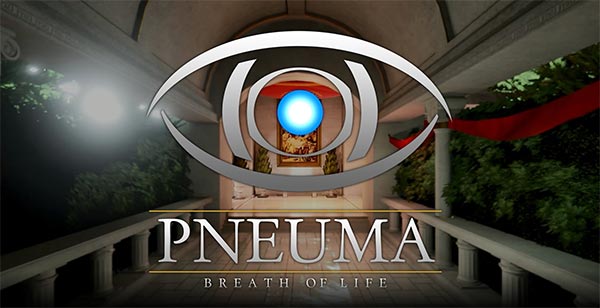 Thanks to Xbox’s Games with Gold promotion I end up with a lot of games that I never wanted and will probably never play, but every now and then it is fun to start one up and see what it is all about.  That was the case with Pneuma: Breath of Life.  It is a first person puzzle game that all Xbox Live Gold members got for free last November, but I just now decided to give it a try.  It was fine, and it was a relaxing way to spend just under four hours, but not something I would enthusiastically tell people to spend their money on.

Pneuma starts out with you taking control of a being that has just now come in to existence, and since everything seems to react and be focused around him, he decides that he must be a god.  As the puzzles get harder and more devious he starts to question his deity.  I will not spoil his somewhat interesting conclusion.  Though the game seems to think the pay off is more thought provoking than it is.

First person puzzle games are all about two things: good graphics or art, and clever puzzles.  Pneuma does okay on both fronts.  The game’s Greek temple aesthetic works well for a would be deity, but there is nothing groundbreakingly pretty to look at.  As for the puzzles, they start off really easy as you learn the game’s systems, but just when they start to get difficult, the game ends.  I guess there are three hidden puzzles that I didn’t do, so I may go back and give them a shot, but I doubt it.  The game just needed a couple extra chapters to have players truly test their metal.  Puzzle games shouldn’t make players have to go find a challenge.

All in all, I enjoyed my time with Pneuma: Breath of Life, and it gave me 850 Gamer Score for very little effort, but I would have enjoyed it less had I paid money for it.  This game is worth a couple of dollars at most, so if it is on sale for $5 or less and you love puzzle games, I would say it is worth a try.  Though if you really are a puzzle gamer I don’t think Pneuma will present much of a challenge, more of a breezy walk in the park.  Much like walks in the park you shouldn’t have to play a lot for it.