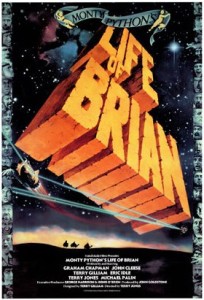 Monty Python’s Life of Brian came out in 1979, and was directed by Terry Jones.  It may not be quite as well known as Monty Python and the Holy Grail, but it is on several best comedy of all time lists, and it is very funny.

The story is about a young man Brain (Graham Chapman) that is trying to help overthrow the bonds of Roman oppression in Israel, but along the way is mistaken as a possible messiah.

The story is pretty much just a way for Monty Python to have a good time, and make fun of just about everything, and considering the sheer number of jokes they throw at you it is amazing how many of them land, but the humor is very British, so if you don’t like British humor than this probably isn’t for you.

The acting is all top notch with the Monte Python cast all playing several roles.  The Monty Python crew included: Graham Chapman, John Cleese, Terry Gilliam, Eric Idle, Terry Jones, and Michael Palin.  It is great to see them all take on very different characters, and even be two people in the same scene.

I love watching this movie.  It is still funny every time I watch it, and it seems like I find one more joke that I didn’t see before because I was laughing to hard.  The Holy Grail is probably still my favorite Monty Python movie, but the life of Brian is a very close second.