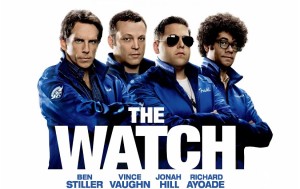 The Watch is a movie that came out in the late summer of 2012, and it was directed by Akiva Schaffer.  This movie is all kinds of awful.  It is so bad that people in it should feel bad.  They are funny people, but this in an incredibly unfunny movie.

The film starts with a security guard getting killed at a local Costco, so Evan Trautwig (Ben Stiller) decides to start a neighborhood watch.  Bob McAllister (Vince Vaughn), Franklin (Jonah Hill), and Jamarcus (Richard Ayoade) all sign up, and they soon find out what killed the guard: aliens.  At some point during this movie I think it was supposed to get funny.

The story setup was fine, but as always the devil is in the details.  They just didn’t write very much if any funny dialog, and you can tell that anything that is funny in this movie is just the cast giving up and improvising to try and make it better, but it didn’t happen enough.  I would have literally rather watched the actors just go to the bank and cash their checks, which is what they are doing on screen anyway in this movie.  It probably would have been funnier too since I am sure Stiller could get some funny lines in with the bank teller.

You can also tell that this movie started out as PG-13, but then someone told them that ‘R’ rated comedies are doing well now, so they just tried to swear more, and again improvise some dirty jokes in an effort to try and ‘R’ it up a bit, and it didn’t work.

Like I said in the intro, all these actors can be very funny, but this movie isn’t, and they should feel bad for letting the studio release it.  Whatever you do, learn from my mistake, and do not see this movie.

2 Replies to “Don’t Watch The Watch!”