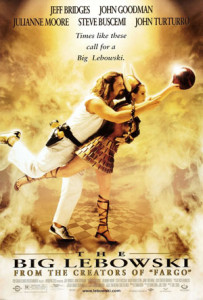 The Big Lebowski was written and directed by the Coen brothers, and it was released in 1998.  Like most of the Coen’s movies it was not an instant success, but has become a cult classic.  It is a ridiculous movie, but still quite good.

The movie at is heart is about Jeff “The Dude” Lebowski (Jeff Bridges) trying to replace his rug after an Asian man urinated on it after confusing him with another Jeffery Lebowski (David Huddleston) who happens to be a millionaire.  The Dude teams up with bowling pals Theodore Donald “Donny” Kerabatsos (Steve Buscemi) and  Walter Sobchak (John Goodman) to try and work everything out, but they are in hopelessly over their heads.

The story is amazingly complex, but in the end matters very little.  The story is really about getting know the characters in this movie, and how they react to the ever changing quest that they are on.  It is hilarious to watch it all unfold.  The Coen’s know how to write a movie.

It would not have worked without the great performances of Jeff Bridges and John Goodman.  The Dude is a role that will define Jeff Bridges probably for the rest of his career, and Goodman’s Walter is the perfect foil for him to bounce off of.  The rest of the actors do their jobs well, but they mostly just set the stage for Bridges and Goodman.

The movie contains quite a bit of strong language, so that may be off-putting for some, but I think this movie is great.  It is also a good movie for repeat viewing since the Coen’s jam packed the movie with so many little quips and nods that you will probably miss them the first time through.  The Coen’s have continued to make great films, and The Big Lebowski is no different.  I think it is well worth watching just to see Jeff Bridges be The Dude, and to know that The Dude abides.