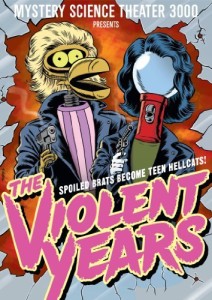 The Violent Years is a movie from 1956, and it was written by the infamous Ed Wood, and like all things Ed Wood the crew of Mystery Science Theater 3000 is here to make fun of it.

The plot is pretty simple, four well to do girls have parents that don’t spend time with them, so they get bored and start committing crimes like theft, rape, murder, and high school class room destruction on the behest of the communists.  Because as we all know communists hate high school.

MST3K had a hay day with this film.  The acting is wooden, they use the same footage over and over, and Ed Wood’s script escalates the violence these girls are willing commit amazingly fast.  This fact contributes to my belief that Ed Wood was really a genius, he knew that he could not be one of the greats, so why not be remembered as the worst.  It is one of the those special bad movies where the jokes pretty much write themselves, but like pretty much any MST3K movie, your enjoyment factor depends a lot on your mood or your company

This movie like a lot of the MST3K films is streaming on Amazon Prime, so if you are looking for a funny way to kill an hour and half, then this is a great option, and it is always fun to take a moment and remember just how bad Ed Wood really was.