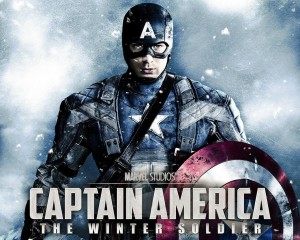 It is looking like Marvel’s bet to start summer in early spring is paying off.  Captain America: The Winter Soldier is the sequel to 2011’s Captain America: The First Avenger, and this movie is better in just about every possible way.  Future Marvel movies will have to work very hard if they are going to be better than this film.

The story picks up sometime after the Avengers movie, and S.H.I.E.L.D is now a respected world counter terrorist agency.  Its most famous member is Captain America, AKA Steve Rodgers (Chris Evans), but just as things seem to be going well for the agency, enemies from within and without will threaten its very existence.

There was a lot of talk before this movie came out that it was more of a 70’s spy movie than an action movie, and I wouldn’t go that far.  Captain America 2 is still about beating up bad guys, but they definitely use the spy genre’s tropes to their benefit.  Captain America 2 also takes on a much darker tone, not Dark Knight dark, but still much more serious than the other Marvel movies, and it is like a breath of fresh air.

While I love the witty banter and silly jokes in the other movies, it was nice to have one of the movies take itself seriously, and to deal with current issues.  That is not to say there aren’t good one liners and a couple of laughs in this film, because there are, but this film has important things deal with: like the USA now being a surveillance state.  Not to mention Marvel Film Universe changing events.

The cast continues to be wonderful: Chis Evan, Scarlett Johansson, Samuel L. Jackson, and Colby Smulders (who I was underwhelmed with before) all bring this movie to life beautifully.  They really know their characters well at this point, and now they can make their Marvel counterparts feel like real living people despite the fact they are larger than life superheroes.  There isn’t a weak link as far as acting goes in this film.

The only problem I have with this movie is the title.  You would think that with The Winter Soldier’s name being in the title, that it would be all about him, but this is a S.H.I.E.L.D movie.  It really should be Captain America and The Agents of S.H.I.E.L.D (Oh yeah it has The Winter Soldier in it too!) or something.  Still that is a very minor quibble, and it has nothing to do with the quality of the film.  It just threw my expectations for a loop a bit.

This was a big movie for Marvel because it sets up the next group of films as we head for next big Avengers flick, and so it took on a different tone and style then before.  Marvel has had amazing success with this universe of films, and if they can keep pumping out movies like this, they will continue to do so.  You should see Captain America: The Winter Soldier.  It is fantastic.

2 Replies to “Marvel Kicks Off Summer With The Winter Soldier!”