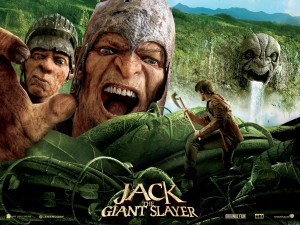 Jack the Giant Slayer is a 2013 film directed by Brian Singer (X-Men).  It had a large budget, and it was a pretty massive failure for Warner Bros/Legendary Pictures, so I went in with low expectations.  I was pleasantly surprised.

The story is about Jack (Nicholas Hoult) who since he was a child has dreamed about giants and adventure, but since he is a peasant farm-boy has little hope of ever fulfilling his dreams, but as fate would have it he runs in to a monk who gives him some magic beans, and he is soon on the adventure he has always dreamed of.

This film could have been just another overwrought special effects “epic”, and it kind of still is, but Brian Singer is able to bring in an element of fun that saves this film from just being a 3D slug fest.  He is able to get the cast to have just as much fun as he is having, and it carries through the screen.

Nicholas Hoult is pretty good as the title character Jack, and for his major leading role he does an admirable job, but back up cast really shines.  Ewan McGregor as Elmont the captain of the king’s guard plays the role with an wink and a nod, and he is always having such a good time that it is contagious.  Stanley Tucci is also having fun as the villainous Lord Roderick, he seems to enjoy being over the top evil.

Despite the good efforts by the cast and Singer, this movie still feels like it was designed in a boardroom to try and cash in on a popular fairy tale that they tried to prop up in to something bigger than it is, so at times its sudo-epic nature can make it feel dull and contrived.  We were just lucky that they decided to hire good talent for this particular cash grab, and it ended up better than it had it any right to be.

Jack the Giant Slayer is not a great movie, but it is a fun way to spend a couple of hours.

2 Replies to “Jack the Giant Slayer”