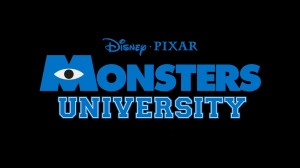 Monsters University is a 2013 movie, and a sequel to the 2001 movie Monsters Inc.  The movie got all the main characters to reprise their roles, and it was directed by Dan Scanlon.  The movie was a huge success world wide pulling in over $724 Million.

The story follows a young Mike Wazowski as he tries to follow his dreams to become a professional scarer.  The problem is that he is adorable and decidedly un-scary, so he has to work at it very hard.  Meanwhile James P. “Sulley” Sullivan is a natural scarer, but is to lazy to study his craft.

The movie is actually just a standard college frat movie, but written for kids.  So if you have seen Old School or Animal House, you will kind of know what to expect here, but your four year old can watch it.  Luckily there is enough Pixar charm to cover over its generic nature.

Billy Crystal and John Goodman are great with their roles.  They seem to understand what makes a good voiceover.  The rest of the cast is good too, especially the Pixar usual suspects.  I liked that Nathan Fillion had a role too as the leader of the rival frat.

Monsters Inc. was never my favorite Pixar movie, but they did a good job with this.  If you are looking for good family film, Monsters University is a fine choice.  It is not quite the up to the Pixar classics, but it was cute, and had a lot of heart.

2 Replies to “I Attend Monsters University!”