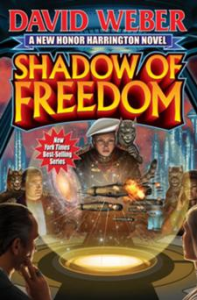 Shardow of Freedom is book written by David Webber, and is the fourteenth of series (or third or twentieth depending on how you look at it), so if you haven’t read the previous thirteen there probably isn’t a lot of this review you will understand.  The only reason I am writing this review is to vent on the internet.

This book commits the same sins as a lot of the more resent Honorverse books in that it introduces a lot more new characters that you don’t care about, and most of the action takes place around a conference table then in giant space battles, and I am a big fan of giant space battles, less so conference tables.  The bad guys in this book are also uninteresting, they are either evil and dumb,  The Solarian League, or evil and twirling their mustaches in the background, The Mesan Alignment.  Plus the Solarians are so out classed as far as tech and firepower goes, that the strategy is how to win with killing the least amount of bad guys, so The Star Empire of Maticore isn’t even threatened in this book, so there is nothing to get worried about except that maybe the Mesan’s will do something, they don’t, but I assume they have a great maniacal laugh.

I keep reading these books hoping they will get back to what made them great in the first eight books.  With exciting action and Machiavellian strategy, but instead they have taken a turn for more characters and more conference tables then I can count.  I would like to say this is the last Honor Harrington book that I am going to read, but they used to be so good that I know I will keep reading and hoping for their return to glory.

4 Replies to “Is the Shadow of Freedom worth reading?”