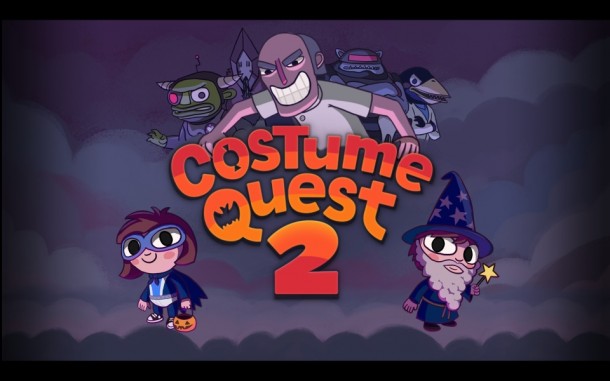 I love games made by Double Fine, and even more than that, I loved the original Costume Quest, so it was only a matter of time before I played Costume Quest 2.  It took a few months, and a sale, but its day finally came.  While I still found the sequel charming, I just wish that they would have done more with the game in its four year hiatus.

This game takes place right after the events of Costume Quest.  Wren and Reynold jump through a portal that will hopefully lead them home, and it does, but their evil dentist is traveling though time to ruin Halloween forever.  Wren and Reynold will have to don their costumes and take the evil Dr. White down.

The story is easily the best part of this game.  It is creative, and is a great way to get the kids back in action.  The problem is that there isn’t enough other ideas to keep even a game with Costume Quest 2’s minimal run time interesting.  It took me about six hours to complete this game and that felt padded.  Like in Costume Quest, this game involves Trick or Treating, but 2 forces you to do it in like six different areas with minimal breaks in between.  It makes the middle three hours of this game quite a slog.

The game mechanics are very similar to the first game, but with some tweaks.  It is a simple turn based RPG, and your options are: a basic attack, a super attack or heal when a character’s meter is full, or playing a Creepy Treat card.  The cards do all sorts of things like double damage or heal teammates.  Your attacks change depending on the costumes your group is wearing.  Also during battle if you time things just right you can do more damage, attack twice, block, or counter attack.  It is nice little detail to keep you more in the game, but it still gets a bit repetitive.

This game almost felt like an expansion to the first one, and maybe it would have been better that way.  Pretty up the first game and add in the new combat system, and then tack on a new three hour adventure.  To try and force this game to be six hours was a shame, or they should have thought of more things to do, but still this game is cute, and if you played the fist one it is a good excuse to go back to the world of Costume Quest.  I just hope if Double Fine makes a third one they can think of a few more activities.

One Reply to “Is Costume Quest 2 A Trick Or A Treat?”