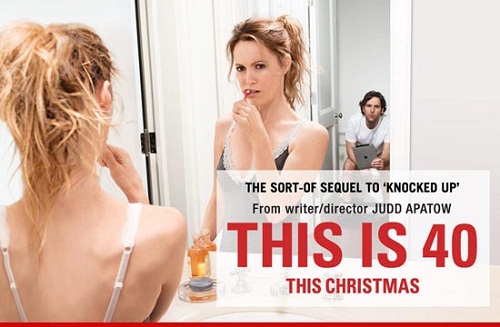 This is 40 had a lot of things going for it:  It was written and directed by Judd Apatow.  It was the spin-off of Knocked Up, and it was based on two of Knocked Up’s well liked characters.  It featured a lot of great talent, but the problem is that none of it went anywhere.  It was still funny in places, very funny in fact, but it just lacked cohesion.

This movie follows Debbie (Leslie Mann) and Pete (Paul Rudd) as they try to navigate turning 40.  Their kids are getting older and harder to deal with, their parents drive them crazy, and their jobs are not going well.  They are just having a hard time making it all work.

Now Mann and Rudd are very funny, so this premise sounds great, but the problem is that there is no real story.  It is just them having a hard time getting older.  The crappy parents thing could have been one story, or their jobs going south could have been another, but instead of picking something and exploring it, we get a bunch of little vignettes, so nothing really keeps us engaged.

Like I have said the cast is wonderful, and they almost make this movie work.  Considering all of this movie’s flaws, I would still probably watch a sequel just to see all these people work together again.  Because if they had gotten a script with any meat on it at all this would have been a good movie.

It has been awhile since Judd Apatow has given us a full fledged hit, and I think This is 40 could have been one, but instead of giving us one decent story, he gave us like four ‘meh’ stories.  Still, these are all good actors in good roles. so maybe Apatow can bring it all together for This is 50.