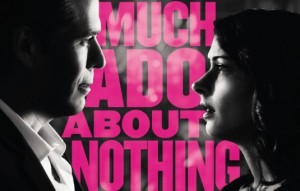 Much Ado About Nothing is movie a Joss Whedon filmed in 2011 based on Shakespeare’s famous play.  The movie came out in US theaters in June 2013, and has received a lot of critical praise for its fun adaption using Shakespeare’s classic language showcased in a modern day setting, and I have to agree.

For those of you that did not have to read the play in school, it is about a bunch of Nobles that get together for a weekend of feasts and drinking, and more than a little bit of wooing.  There is an evil Prince who wants nothing more than to keep love from occurring, so tries to sabotage the whole weekend.  Everyone is drunk and witty.

The movie was filmed quickly and at Whedon’s house, and since it stars all the regulars from Joss’s films and shows, It feels like a family get together.  I would love to hang out and be witty with all of them.  It seems like a lot of fun.  It is a shame Nathan Fillion’s role is so short because he is a hoot to watch, and he really brings the incompetent constable Dogberry to life.

Since the movie uses the original langue it can be a little hard to follow at times, but everyone is having such a good time that I just smiled and followed along as best I could, and since there is not a lot of substance to the play you don’t to need know a lot anyway.  Joss should film all Shakespeare’s plays at his house.  It would make a great box set.  PBS should call him and get on that.