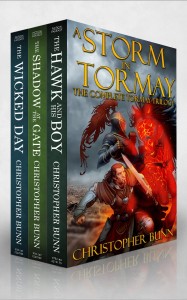 Being in a Kauai affords you a lot of down time, so while I was there I read the Tormay Trilogy: The Hawk and His Boy, The Shadow at the Gate, and The Wicked Day.  They were all written by Christopher Bunn.  Like a lot of indie books, none of these books tells a complete story, and they were meant to be read together, but since I got them all as part of my indie book bundle that was not a problem.

The story follows a young thief named Jute.  While doing a job for the Thieves Guild he unknowingly opens a box containing a magical knife.  He accidentally cuts himself on the knife, and is soon on journey to save the land of Tormay from the Dark with his new friend The Hawk.

At first when I started to read this book I was a little put off by its generic nature.  Young orphan who finds out he is special, save the world from the Dark, gods of Wind, Sea, Earth and Fire, and words of power, but Christopher Bunn’s excellent writing won me over.  He wrote the characters so well, I didn’t care that they are all a little familiar, and he developed his lore for the land of Tormay so well that you could almost believe that it was real place.  Even his magic system made sense.

If you are looking for a good fantasy novel to read, you could do a whole lot worse than the Tormay Trilogy.  Like most indie books the first book in the series is free right now on the Amazon store, or if you want the entire trilogy it is only $3.99, so it is cheap reading no matter how you get it.  I will no doubt be looking up more of Christopher Bunn’s books.