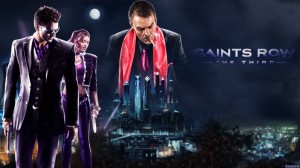 This game came out three years ago, so I am not going to do a full review of it, but since it is one of the games I am playing right now (thanks to Microsoft giving it to me for free), I thought I would give you my impressions.

The people over at Volition software have done themselves proud.  They took all the fun parts of the GTA series and made them more fun.  The driving is faster and crazier, the shooting is hectic and over the top, the hand to hand combat is actually enjoyable, and the set-piece mission are bananas.  It is like they sat down with my thirteen year old self and asked him what he would want out of a game, and then they made it.

I guess the story picks up after the first two games (I only played the demo of the first one), and now The 3rd Street Saints have gone from street gang to media empire, but new gangs are trying to bring them down.  It is not that exciting, but it gives them a frame to design their wacky missions around.  Really it boils down to giving you new people to shoot, and a new city to explore.

Still as much fun as I have had playing this game there are some things I don’t like:  The city doesn’t feel alive.  It is big and open and lets you play around, but it doesn’t have that lived in feel.  Also the dialog and the jokes can get a little too puerile for me sometimes, and the game can get a bit repetitive between the big set-piece missions.

Even with those complaints the game accomplishes what every game should strive for, it is fun.  It makes me want to play more, so I can have a good time and laugh a little.  Sure if I was still thirteen I would probably enjoy it even more, but the difference between thirteen and thirty isn’t as big as the you would think.  I will be watching for a good deal on Saints Row IV.