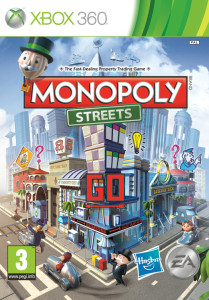 Thanks to the Xbox Live Ultimate sale going on now, I got to pick up the game Monopoly Streets for the Xbox 360.  It was released in 2010 and it was developed by EA.  If you are looking for a decent version of the classic board game then this could be for you.

The game play is exactly like the board game except that all the action is on the Xbox, so there are no little pieces to clean up, plus the board is now a 3D city that your onscreen characters run around in.

When you start the game you get to pick your board, your game pieces, and any custom rules that you may want to use: like getting money for landing on Free Parking.  The more you play the more stuff you unlock.

The controls are just a series of menus.  One to choose whether you want to end your turn, manage your properties, trade, or declare bankruptcy.  In the property management screen you point left or right on properties to remove or add houses, or hit ‘X’ on them to mortgage or pay off the mortgage on them.  This last menu is the worst part of the game because it is supper touchy and you may just be trying to go down to check on your properties, but it is adding and removing houses all over the place.

Still having the game on the Xbox means you can play the game in under an hour, and it makes it much more fun that you don’t have to pick it all up at the end.  You can get it right now for $10 on the Xbox live store.