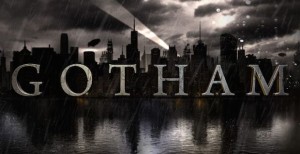 I was a little skeptical of the TV show Gotham, but it has at least got me interested enough to keep watching it.  The show follows new Detective James Gordon as he tries to fight crime in the completely corrupt Gotham City.  His first big case is of course the murders of Thomas and Martha Wayne, and he is in way over his head.

I think they got the tone of this show right.  Thanks to its comic book roots it is crazy and a little over the top, but it still manages to take itself seriously so that it doesn’t seem like a farce.  It did suffer a little bit because they tried to introduce too many characters, so it didn’t really ever focus on what was going on enough.  For instance they kept showing young Selina Kyle, but she never really did anything,  Next week’s episode is named after her, so maybe it will make more sense.

The show seems to have a good cast, and the sets bring Gotham to life.  We will see if they can build off this episode in to something really good, or if they get lost in the weeds, and it becomes yet another canceled FOX TV show.  For now it looks like FOX is my home for Monday nights.

One Reply to “Gotham Gets TV Season Off To A Good Start!”