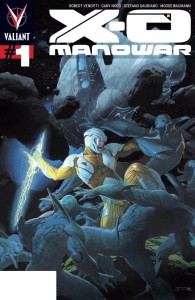 Some of the free comics I got from Comixology were X-O Manowar issues 1-4.  I don’t read a lot of stuff from Valiant comics, but if the rest of their stuff is as good as Manowar then that will have to change.  X-O Manowar was big in the 90’s, but with Valiant re-launching their comic brand it was a good time to reboot Manowar too, and they are doing a great job.

The story starts off with a group of Visigoth rebels trying to stop the march of the Roman Empire.  While they are fighting they are captured by aliens, and after years of slavery on the alien ship the rebel leader Aric finds armor that will only attach to a true warrior and gives the wearer amazing powers, and he uses it to exact his revenge.

What I love about this comic so far is the isolation of the main character.  He is an alien slave for years, and when he finally gets the power to free himself and his people, he finds out that things have changed while he is away, and none of that is possible.  Despite the fact that all superhero origin stories are similar they managed to make this one feel fresh and exciting.

It is also well drawn and very colorful, and the action is displayed well in the book.  All the artists did a great job.  The art is a least half of the reason to read a comic book, and they are holding up their end.

I will be looking to get more X-O Manowar comics in the future.  It is a good book from an eager comic book company looking to make its mark, and I wish them the best.  If the same old stuff from DC and Marvel has got you in a rut, Manowar might be just the book you have been looking for.