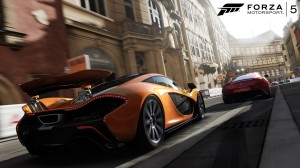 I always like to have at least one racing game in my library for any system I own, so when the Xbox One came out I picked up Forza Motorsport 5 by Turn 10 Games and published by Microsoft Studios.  It is a great showcase for the power of the Xbox One, and it is a blast to play.

Much like any racing sim, the game starts you off with normal every day cool cars like a Mazda RX8, but if you stick with it for a few hours then you will be racing around in Ferraris and McLarens.  Play a little longer and you can race in just about any car of your dreams on famous tracks all over the world.

The great thing about Forza 5 is how different every car feels when you drive it.  An AMC Javelin is powerful on straightaways, but you have to slow to a crawl around turns, but get in the driver’s seat of an Indy Car and it feels like you are trying to wrangle a crazed cat on hard wood floors while you are in your socks.  It is exhilarating.  It is a credit to Turn 10 that they were able change the handling on every car while having it still feel like the same game.

That being said if you don’t like the way a car handles you can always upgrade it so it feels a little different.  Give it some more power, change the gearing, or take a little air out of the tires.  You can tweak just about everything under the hood.  Not a gearhead, but love to play with paint?  You can spend hours custom detailing the looks of every car in Forza 5, and then share your paint jobs online for more in game credits.

The biggest change in this game from previous ones is the new Drivatar system.  This was introduced in earlier games to race for you in long tedious races, but now your Drivatar races for you all over the world in people’s single player games.  If he does well you earn a little extra cash, but the best part about the Drivatar system is that you never just race against the computer AI.  You are always racing against someone’s Drivatar.  This make the races way more unpredictable because you could be racing against someone like me who takes out everyone on the road, or against that guy who loves to take the perfect lines around the track.  If you race against me, I apologize in advance since my Drivatar will probably be trying to constantly force you off the road.

The graphics in the game are wonderful.  Every car and track is lovingly recreated and rendered in 1080P 60FPS perfection.  The game looks so good that you forget that you should even care about the visuals.  It just looks like you are driving around in real cars in mostly real places.  There are a couple of exceptions though, crowds still look odd, and they need better anti-aliasing because there a few jagged edges.

Since they seem to refuse to make a new Project Gotham racing game, Forza 5 is a good substitute.  It makes me a believer in the new generation of video games, and the fact they will get better then this is very exciting.  If you need a racing game for your Xbox One, I recommend Forza 5 whole heartedly.  If you see a driver named Shmee in one of your races, he will hit you.