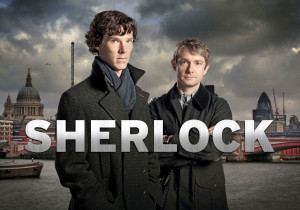 PBS struck gold when Downton Abbey came out, and they have repeated that success with Sherlock.  You would think that BBC America would keep all the good British shows to itself, but since I don’t have expanded cable I am glad that they didn’t.  Sherlock is a modern retelling of the classic Sir Arthur Conan Doyle character, and it is back for its third season.

This season picks up two years after the second, and Sherlock has to come back to London to stop a terrorist threat.  Though since quite a few people think he is dead, coming back will not be as easy as he thought.

This show is all about its two leads, and Benedict Cumberbatch and Martin Freeman play Holmes and Watson perfectly.  They make this show a ton of fun to watch.  Freeman plays Watson as almost a drug addict, who doesn’t want to endanger his life with Holmes, but in the end he needs to feel the thrill of the chase.  Cumberbatch plays the incredibly smart, yet completely self absorbed genius with just enough charm, so that he comes off loveably socially awkward and not just a total jerk.

The first two seasons were great, and it looks like the third season is going to be just as good.  If you have not watched Sherlock yet, you really should, and since a “season” is only three episodes long it doesn’t take long to catch up.

2 Replies to “Figuring Out Sherlock Season 3!”