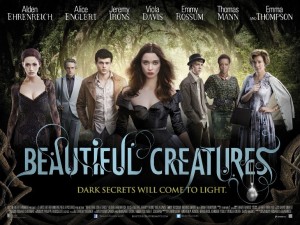 Beautiful Creatures is a movie that was released on Valentine’s Day based off a novel of the same name to cash in on the Twilight craze, but even though this is a bit of a middling movie it still manages to be a better movie than any of the Twilight movies hoped to be.  This movie is not in my normal wheel house of films, but it is fun to change things up every now and then.

The story centers around a teenage boy named Ethan Wate (Alden Ehrenreich) who is trying to deal with the loss of his mother and his grieving father, but his life is changed when a beautiful and mysterious girl Lena Duchannes (Alice Englert) moves to town to live with her uncle the equally mysterious Macon Ravenwood (Jeremy Irons).  It turns out that she is a magic user called a Caster, and that on her sixteenth birthday she will either be clamed for the light or the dark, and yes of course she has the most power of any Caster, so she will decide the fate of the world.

The story is fairly predictable, and really it is just Twilight with a guy as the lead and magic users instead of vampires, but it is competently told.  The actors all do their jobs well, but it looks like the older cast were pretty much just cashing their checks, so it leaves all the heavy lifting to the younger cast.  Alden Ehrenreich and Alice Englert were up to the task, and kept their young forbidden love interesting.

For a movie like this special effects are always important, but they were hit and miss, so it seems like the director Richard LaGravenese tried get around that by having a movie about magic without that much real magic in it.  There was enough to get the point across, but it was far less than I would think.

All and all this was an okay movie.  The young actors did their jobs, and there was just enough super natural happenings to keep it interesting, and if this is your type of movie than I am sure you will love it.  As for me it was passable entertainment, and it was interesting to see a movie out-Twilight, Twilight.