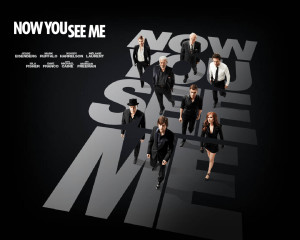 Now You See Me was a surprise hit for Summit Entertainment in 2013, but I think people got too caught up in the cool premise and excellent cast to care that movie itself was lacking in substance.  Though it could be that due to its success I went in with high expectations, while other people were just happy it was watchable.

It is about four talented street magicians, J. Daniel Atlas (Jesse Eisenberg), Merritt McKinney (Woody Harrelson), Henley Reeves (Isla Fisher), and Jack Wilder (Dave Franco), that are brought together by a mysterious man to complete a series of increasingly difficult heists.  The FBI lead by Agent Dylan Rhodes (Mark Ruffalo) is powerless to stop them.

With this setup it seems like it should be a magical Ocean’s 11, but it is never as clever as any of the Oceans’ movies.  Instead of filling you with awe and wonder, they flash a bunch of pretty stuff in front of you and then end up with a ton of cash, and instead of letting you try and figure out how they did it, they have Morgan Freeman’s character tell you like two minutes later.  They clearly think you are too dumb to understand what is going on without them holding your hand.

Since Freeman is always giving away how the magic is done it never feels like the magicians are doing any magic.  It just makes them all seem like hustlers trying to pull a very large fast one on everybody.  It is hard to root for a bunch of smarmy jerks, but that is kind of what they are asking you to do.

They do have a great cast in this film, but they all play their standard characters.  Jesse Eisenberg is smart but neurotic, Harrelson is odd, Fisher is sassy and self confident, and Franco is a cool hustler.  All these actors can do more then play their usual type, but the writers were too lazy for that.  Well maybe not Franco, but if he keeps playing in movies like this we will never know.  It is such as shame.

I wanted to like this movie, but I just couldn’t.  It is pretty and has a fun cast, but it feels like they had a cool idea but didn’t think the audience was smart enough for it, so they dumbed it way down.  It might have been a good movie at some point, but it is not worth watching in its current state.

2 Replies to “Don’t Bother To See Now You See Me!”