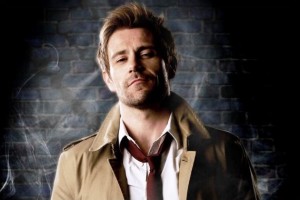 In an interesting turn of events a Warner Bros owned property, Hellblazer, will take on a Warner Bros run show, Supernatural, or at least that is the feeling I am getting from the new trailer NBC released for Constantine.  You can watch it right here:

I will say after the less than good movie with the same title staring Kenau Reeves, it is nice to see Constantine be British again.  Though it doesn’t appear like he is in the UK for some reason.  It must be too expensive to film there if you are not the BBC.  New Constantine actor Matt Ryan has brought the appropriate level of snark to the character, or at least the trailer seems to indicate that he has, so let’s hope they can make his surrounding universe just as fun.

It will also be interesting to see if they make Constantine “heroic” or not.  In the comic book he is usually doing the right thing, but he generally doesn’t care if people get harmed in the process.  In other words he has no problem ‘making the hard call’.  In fact he makes the call a little to early sometimes.  Something tells me TV producers wouldn’t let that fly in prime time, but I guess we will get to find out soon, since NBC has ordered a full series of this show to replace its now canceled Dracula.

I am still waiting to hear how Preacher and Hourman are coming along, but I only have so much time to watch TV.

2 Replies to “Constantine Will Take On Supernatural!”